Ekata, Maina and Kshama * are three little girls in India. Their lives were haunted with serious trouble in the home. Perhaps because of poverty, their father and mother had terrible battles between them. In his desperation one day, their father poured kerosene on himself and lit a fire. He was badly burned, and even though he was taken to a hospital, he didn’t survive.

The mother left the girls alone in the house, abandoning them to care for themselves. Their old, sick grandmother took them in and tried to care for them, but she soon died of breast cancer. In India, girls traditionally don’t have much value, and the girls were separated among relatives who couldn’t give them much more than a roof over their heads. But, worst of all, the relatives lived in separate villages. Ekata, Maina and Kshama not only suffered the loss of their home and parents, but they desperately missed each other.

One day, the girl’s mother came for a visit. She only stayed for a month, and as she was leaving she said, “You won’t see me again for a long time.” The girls didn’t know why their mother left, they only knew they were abandoned and now orphans. But Ekata, Maina and Kshama longed to at least be together.

One day two men, probably family members, brought the little girls to ICC’s home for children, called Sweet Home. When they were ushered into the house their faces broke into smiles. At last they had a home where they could live together as sisters and become a part of a family once more. The girls bubbled over with joy. Soon they were adjusting quite well to their new surroundings. The director commented that they were very obedient. Children all need the love and security of a home, and that is what they find when they become part of an International Children’s Care family.

In India, ICC’s work with children began with the strong will and determination of Mrs. Lilly Kaligithi. In 1996, Lilly left her home in the United States and began an orphan home in her remodeled, two bedroom childhood home. Within a short time, the home was full to overflowing with 26 children. It was then that she contacted International Children’s Care (ICC) and requested assistance. In 1997 DEWS Sweet Home became part of the ICC family of projects.

This children’s village is situated on a small piece of land near the east coast of India. It takes a night’s travel by train to arrive there from either Hyderabad or Madras. One particular donor family took a great interest in this project. They were instrumental in providing the funding for additional land and the construction of five of the 6 children’s homes. These homes, made to comfortably house 10-12 children as well as house parents, form the centerpiece of ICC’s work with the children in India. Here they receive love and care within the loving environment of a real home.

Over the years, many children have been a part of the DEWS Sweet Home family. Educational opportunities are found in the FLAIZ school. It is not unusual for the Sweet Home children to take top honors in their classes as Lilly sets a high academic standard for the children. As well, vocational training classes are offered to the children in order to give them a means of self-support. A small agriculture program operates to teach the children about growing their own food and for providing fresh produce for the homes. 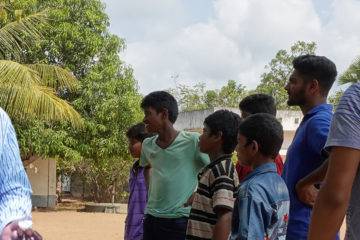 Life has to end, love doesn’t

We are mourning the loss of one of the house fathers in the DEWS Sweet Home village in India. Mattai passed away last week; he recently contracted COVID-19, and he had other complicating factors. His Read more…