The noise is at a dull roar as people mull around rushing to catch the right train to their destination. Venders selling their wares patiently wait as harried people try to catch a bite to eat or that last minute item forgotten as they rushed out the door earlier that day. People push and shove trying to catch a glimpse of the board that shows the arrival and departure times of all the trains coming into the station, hoping their train is not delayed. In the midst of all this cacophony is where Bucharest police found little Viorel*.

No one in the train station was able to identify Viorel, and he didn’t know much about himself either. Eventually, the authorities brought him to the ICC Romania Receiving Center. When he entered ICC care, all anyone knew about him was his name and some facts that they could tell by just looking at him – like the color of his hair and eyes. Yet, unlike many of Romania’s abandoned children, Viorel has been given the opportunity to experience the love and nurture of a real home environment.

While the story of Viorel’s early life is heartbreaking, stories like this are fairly common for some of Romania’s most vulnerable children. While progress has been made in recent years to combat the problems of homeless children like Viorel, there are many Romanian children who are still abandoned and left to fend for themselves. Unlike these children, Viorel’s future is bright. He has a home, plenty to eat, a mom and dad who care about him, and he is obtaining an education.

ICC Romania’s children’s village was established to provide homes and families for orphaned and vulnerable children. Here’s how ICC’s work in Romania has developed through the years.

In 1991 ICC established a program in Romania to care for children with critical needs. This gradually expanded into a social welfare program for indigent families with children. In 1997 the emphasis shifted to the care of orphaned and abandoned children.

ICC Romania established a receiving center in late 1997 in Bucharest. In 1998 facilities and land were purchased in Odobesti (pronounced O’-doe-besht), a rural village outside Bucharest. The receiving center transferred to this location near the end of the year. In early 1999 a grand opening was held.

In its prime, the receiving center had the capacity of caring for 40 babies and small children at any given time. Many of ICC’s children were abandoned in the maternal hospital by their mothers.

The local government was interested in having ICC expand its capability for providing permanent care for orphaned and vulnerable children. It was decided to develop a children’s village. The construction of the first children’s home began in July of 2002. Since that time, two additional homes have been built while the receiving center’s function has been phased out.

More information about the ICC Romania Children’s Village is available
by contacting ICC at (800) 422-7729. 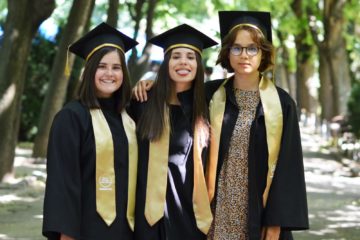 Even the current world-wide pandemic can’t dampen our excitement for the three young ladies who recently graduated from the Adventist High School in Bucharest Romania at the end of June. Florentina “Flori,” Valentina “Teo,” and Read more…

Read 2019 and earlier updates at our old website! Go to https://www.icc.dream.press/iccblog/